Does an air purifier cool the room?

The straight answer is no, an air purifier does not specifically cool a room. However, that does not mean their use doesn’t make the air in a room cooler. It can do this because of the airflow generated when they are used.

An air purifier is designed to "purify" or clean the air to improve its quality in a building, such as an office or a home. It draws in the air, and through the use of a fan and a filter, traps the pollutant particles, such as dust, pet dander, and pollen, and the fan then recirculates the clean air into the room.

The effect of the fan pushing out the clean air can create the feeling that the air, or room, is cooler, though usually only if the air is flowing in your direction and you are close enough to feel it on your body.

The cooling effect of the airflow you feel from an air purifier is called "wind-chill". The stronger the airflow, the cooler you will feel. The air purifier's airflow rating will give you some idea as to how strong the airflow will be.

An air purifier will have no effect on room temperature (and neither will a fan). They do not “cool the room” but rather lower a person’s temperature through the “wind-chill” effect. However, this process is very effective at improving comfort in warm conditions.

How much cooler you will feel in that airflow depends on the airflow rate of the air purifier, which often isn’t that high. Most air purifiers average 150 to 500 m3/h (cubic meter per hour) which is equivalent to 80 to 300 CFM (cubic feet per minute). A desk or ceiling fan is usually around 1700 m3/h (1000 CFM).

Of course, if the air purifier doesn’t have a fan and uses an ionizer instead, you will not feel any coolness in the air.

What is an air purifier?

An air purifier is designed to draw in air that is full of pollutants and contaminants, push it through a filter that traps all the particles – some even trap odours and airborne viruses – and push out the clean air to recirculate in the room to improve the indoor air quality.

Air purifiers use motors to activate the process of drawing in and pushing out the air using fans. They are generally not working at full capacity for any length of time, so they're not in use for long enough to build up heat. Most of them don't even get warm.

In recent years, manufacturers have developed air purifiers that are able to clean the air as well as function as a fan, which helps to keep people cooler when the climate is hot. The design of these air purifiers allows them to draw in much larger volumes of air. This extra movement helps maintain comfort levels in warmer conditions.

You might think that the way the air flows doesn’t matter – actually, it does. Air purifiers come with an upward airflow or a forward airflow. With upward airflow, the unit draws in air from the front, sides, or back, or all directions, and pushes the clean air up towards the ceiling.

You are unlikely to get any airflow in your direction or benefit from a cooling effect. As the air is being directed to the ceiling, the “wind-chill” factor will not be felt.

Air purifiers that have a forward airflow draw in the air from the back and push out clean air to the front and if you are in that line of airflow, you will feel some coolness. Some of these types of air purifiers also oscillate, or move from side to side, changing the direction of the airflow.

The size of the room will also have an impact on whether the room will feel cooler when the air purifier is in use. The smaller the room, the less space there is for the air to circulate and therefore the room may feel a little cooler.

How to cool a room when you have an air purifier

For heating and cooling, you may prefer an air conditioning unit. An air conditioner draws in the warm air which then goes through a cooling unit, a dehumidifier removes the water droplets in the air and it is then blown back out into the room as cool air by a fan.

They can work in a similar way during the winter months to blow out warm air. All you need to do is ensure the heating element in the air conditioner is turned on, so that when the air passes over it, the element heats up the air before it is circulated into the room. 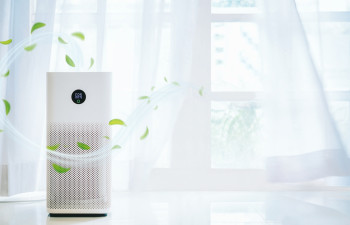 What is the best air purifier?​ 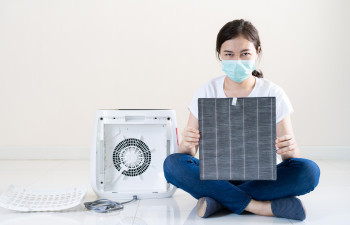 Do air purifiers help with COVID? 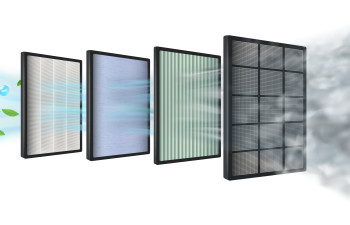 Do air purifiers help with smoke?